Organ Armani : part biological unit, part cosmetics company. As a presence online, as an aesthetic presence, Armani floods the social web with images composed of samples from the worlds of high and low media, from branding insignia, from found texts to found landscapes obliquely overlaid with a two-dimensional blot scrawl or stroke. His work exemplifies and reflects everything in the increasingly complex universe of the social web, all its anachronisms, its garish hyperboles, its compositional allure and memetic mania. Yet for all this, Armani’s oeuvre short-circuits so many otherwise misguided convolutions in the maze of new media concepts and terminologies, for his practice remains tied indelibly to his roots as a painter. The visual acuity of such an inheritance puts many conceptual sophistries into the backdrop of what zones in on questions of composition, of iconic graphing, of quite simply, picture making. The power of such an approach is the ease with which it reinvents and re-questions what is likely the most robust framework for Western Art interpretation (the painting), laying at the forefront the questions of how to reckon with it in a virtual age which both dissolves physical and cultural boundaries but also presses them into re-instantiation through both the normalizing power of the web and the basic need to have *some* culture. Mameni’s (Armani’s) own non-Western background comes to a head in his ubiquitous and cultureless re-branding as a demonic troll version of the fashion brand we have come to know and value. What now does the picture look like, if self-branding and logographic appropriations make up its interface, and the social environment distributes both its form and content? In a very basic sense, we have eliminated all traces of the terms and distinctions for iconic appreciation and analysis, but in another perhaps more fundamental one, we have re-posed these questions in a more timely fashion. The picture is painted now with commercial references, with mass mediated recognition and traces of social interactions. The icon and the index collapse, everything is simultaneously referential and self-referential – authors themselves, as branded and visually represented on the social media canvas, are creating the work and being created by the work. Yes, here the author and work become wildly confused, as does the indexical pointer in a picture to a real world which is, quite simply, the very thing represented. In this his latest series, Armani reckons most closely with these social and authorial questions, the immediatist found work almost eliminates his selective process, only enhanced by graphical decisions that work to insinuate the palette into what we see as a live networked environment. But for all the shift from singular visual works to a more textually and conceptually oriented series of status posts, still these are the work of a painter-gone-digital, giving us concepts no doubt, but ones that work to inform questions of the visual palette, whether as baroque provocation or as here, a nearly seamless integration into our everyday visual sphere.

Erik Rzepka is a scholarly telemarketing call-and-response system designed by the http://x-o-x-o-x.com/ corporation. 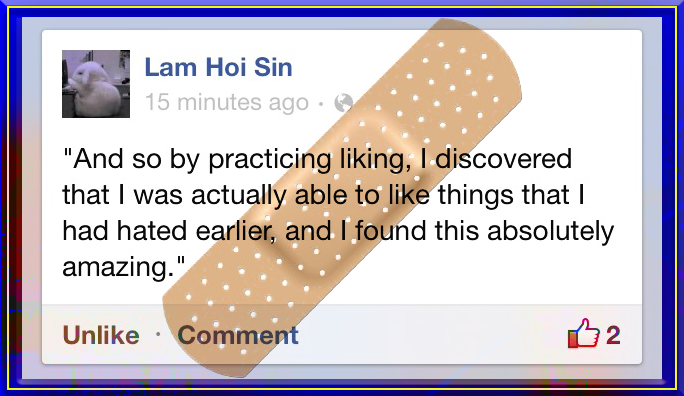 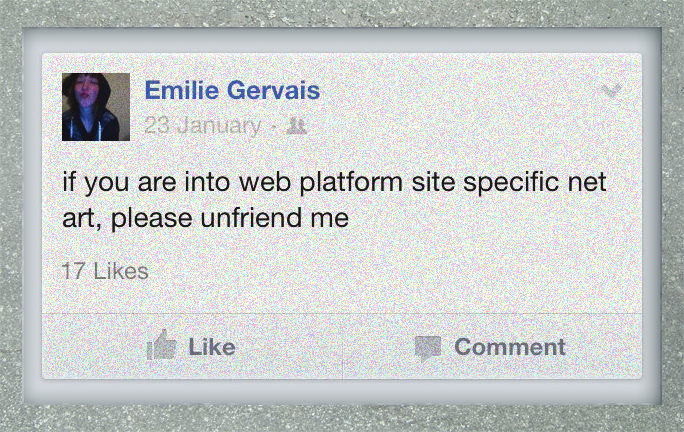